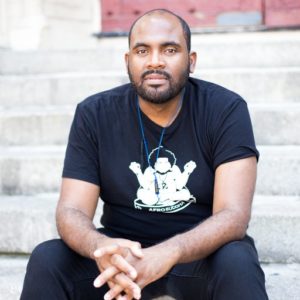 Officially recognized by the Kagyu school of Tibetan Buddhism, Lama Rod received his teaching authorization after spending over 3 years in silent group retreat at Kagyu Thubten Chöling Monastery (KTC) outside of New York City. It was during this time that he dealt with years of past pain and trauma and found forgiveness and compassion for himself, which he views as a critical step before truly being able to help others. Since completing retreat he has been pursuing his Master of Divinity degree at Harvard Divinity School and is a core teacher with the Natural Dharma Fellowship. He has been published and featured in several publications including Buddhadharma, Lion’s Roar, Tricycle, The Harvard Divinity Bulletin, and Spirit Magazine. He is also heavily engaged in social change work and has just released a book with Rev. angel Kydo williams and Dr. Jasmine Syedullah entitled, “Radical Dharma, Talking Race, Love, and Liberation.”